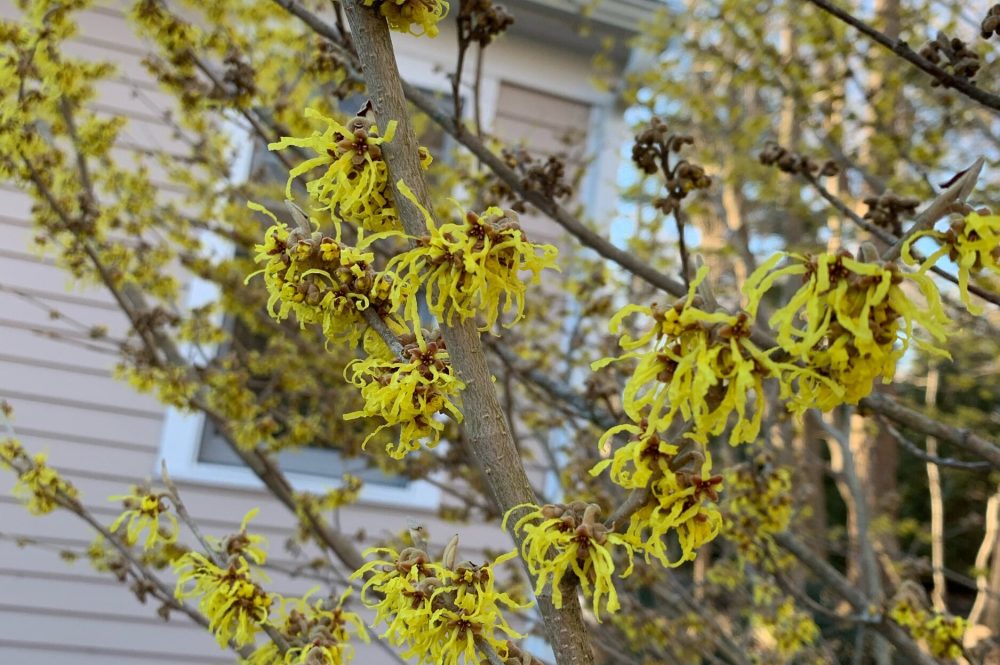 Hamamelis is more commonly known as Witch Hazel and is often mistaken for Forsythia. Both bloom yellow later in the winter. Pictured below is Arnold Promise, named after the Arnold Arboretum in Jamaica Plain, MA where they have an amazing collection of plants from around the world. Witch Hazels come in a few shades of yellows as well as copper/oranges among others. They bloom typically a few weeks before forsythia, usually starting towards the end of February or March. Most Witch hazel have a nice scent that is even more noticeable when you bring branches into the house and set them in a vase to give the home a punch of winter color & fragrance! There is a native species named Hamamelis virginiana that blooms in the fall. Most Witch Hazels have nice foliage in the fall. For the best flowers and fall color we suggest planting them in the full sun, but they are also very tolerant of shade. The Arnold’s Promise at my house does quite nicely on the north side of my house. It is a small multi-stem tree that makes a nice statement in the late winter as it anchors and softens the corner of my home. I have a landscape light on our tree and it really highlights the interesting vase shape and structure. I particularly enjoy checking out my Arnold Promise when returning from my nightly winter walk with my dog Mookie! Tis' the season to be jolly! 🎶 It's a gorgeou

Gift cards are always a great fit! You can order