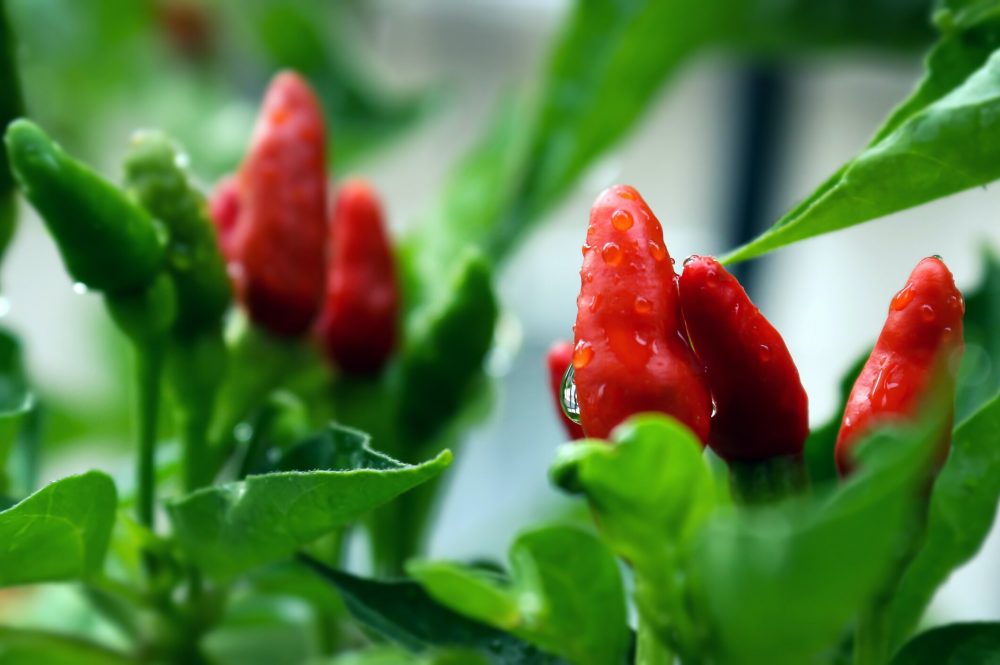 Peppers are coming in hot—we have over 25 kinds of peppers for your garden, from bell peppers to the hottest Chile pepper available publicly— the Carolina Reaper.

Here’s a little quick look at the heat scale of some of the peppers available in store. Their heat is measured by using the Scoville scale— a tool which measures the spiciness and/or pungency of hot peppers. It specifically measures the amount of capsaicin (the chemical compound that causes spicy heat) in a pepper and assigns it a number rating in Scoville Heat Units (SHUs). Carolina Reaper comes in at over 2 million SHUS. Too hot to even handle with bare hands. Some other interesting facts:

Scoville heat units are a measurement of sugar and water.  The test measures chili heat by figuring out how much sugar-water needs to be diluted into a pepper to get to where you no longer feel the heat at all. The creator, W. Scoville, would dilute the solutions until the taste testers felt no more heat and burn, and then he would assign a number to pepper.

Some peppers we are loving:

Sweet and can be eaten raw or cooked. Red, Green, Orange and Yellow varieties. We even have mini bell peppers— perfect for snacking and kids!

Usually blistered in the oven or on the grill. Generally not spicy, but there’s usually one surprise in every bunch. Also try broiling them, peeling the skin off, and laying them on bread with cheese! Delicious.

Often pickled  or stuffed or used as a raw addition on salads and sandwiches. More tang than a bell pepper! While typically bright yellow, it is possible for them to change to green, red, or orange as they ripen.

Often confused with Banana pepper, though they can be used interchangeably. Pepperoncini peppers are very tangy, not too spicy. They’re sweet, mild chili peppers, usually sold pickled. Also known as Tuscan Peppers, sweet Italian peppers, or golden Greek peppers. You can eat the peppers raw, though the pickled variety is by far the most popular and used.

Also known as a cherry pepper. These are great for stuffing. They are on the lower scale for Scoville Heat Units.

Mild to medium heat. The most popular pepper used in Mexican cooking. Poblanos are popular for roasting and Chile Rellenos or Chile verde. Roast on a stove, grill, or broil in the oven.

Most common spicy pepper. Excellent in both chillis and salsas. Chipotle Pepper is simply a smoked jalapeno. Great cut up in salads and guacamole or even  fried— the ever popular jalapeño popper!

Hotter than jalapenos, but not as hot as habanero! Cooked in dishes like soups and chilis, the pepper takes on a mellower flavor while still adding spice. Pickled serrano chiles are popular in Vietnamese and Mexican cuisine.

Hotter than a serrano you can really feel the heat in these peppers. Often used to enhance flavor in savory dishes and you can add it to oil and vinegars for salad dressing, lots of health benefits to this popular hot pepper— Mix cayenne pepper and apple cider vinegar into hot water, making a tea, to clear the sinuses.

One of the hottest widely available peppers. 76 times hotter than the average jalapeño.

Popular in hot sauces and spicy foods. Habanero has a delicious, pungent, smoky quality unlike any other pepper; many people find its flavor and aroma perfect in sauces and salsas.

Just as the name says, this is a killer! One of the hottest publicly available peppers. This extremely hot pepper was developed by a grower named Ed Currie, and is currently the hottest pepper in the world by the Guinness Book of World Records. It’s surprisingly fruity and sweet and is outstanding as a dried powder for adding both heat and flavor, and also as a sauce or hot sauce. Be sure to use protective gloves when handling! Yep, it’s that hot, and we got some!

How hot can you go? Let us know!