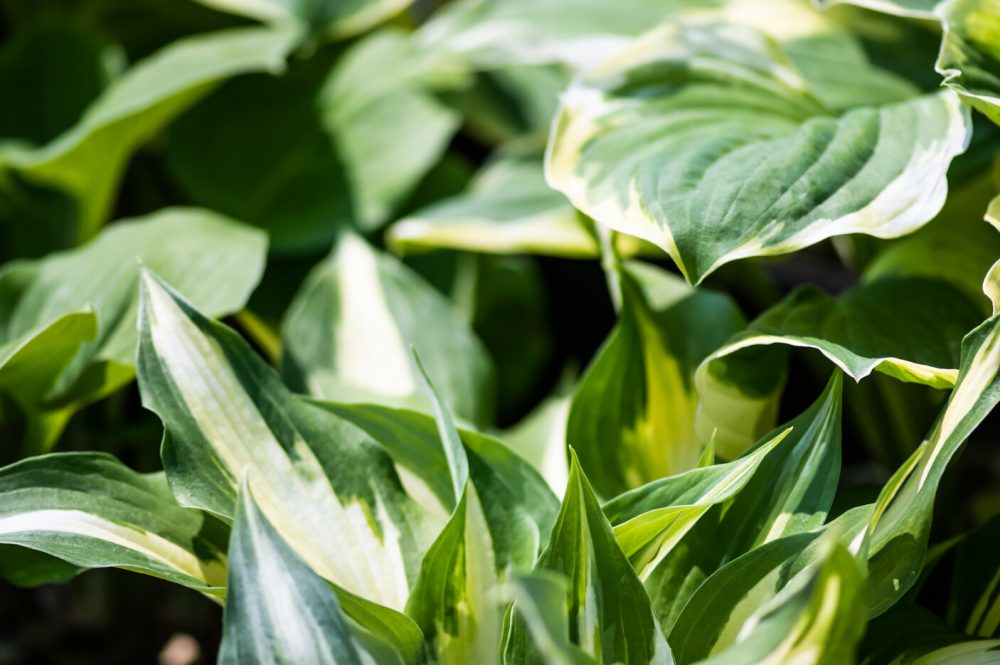 Hosta, with their lush foliage and easy to care for demeanor are a gardener’s delight. An entire garden could be dedicated to Hosta alone. Many go as far as claiming Hosta to be the “perfect perennial.”

These plants are ideal for a low maintenance garden; Hosta varies in leaf shape, size and texture, from curly to ruffled and ribbed foliage. The plant also has many color variations proving there are many unique and unusual Hosta plants for the Hosta collector.

Hostas come in many different sizes. Most are considered large textured. Meaning they pair well with smaller textured plants such as boxwood, Astilbe, and ornamental grasses such as Forest Grass or Sedge. Hostas, especially the larger varieties eat of lots of space. For those of us who prefer to do less weeding and mulching – plant more hostas! WHERE AND HOW TO GROW HOSTA

Hosta is typically a shade lover but its sunlight requirements can vary. A good rule of thumb to determine light needs is the lighter the foliage the more sun the plant needs.

Hosta plants vary from light chartreuse, to emerald, to a green so rich it appears blue. There are yellow and green variations, as well as Hosta so light it appears a creamy white. Any variegated variety will benefit from more sun to keep its white and gold stripes in contrast. That being said, all Hosta will benefit from shade and very few will thrive in harsh, direct sun. Read more tips for gardening with shade here.

Once Hosta begins to grow and establishes itself to its surroundings, the plant will do quite well, tolerate most soil, and grow for years, hitting maturity in four to eight years. — Hostas are so easy. If planted in rich, organic soil, the need to fertilize is minimal. Any hostas looking pale in color may benefit from a handful of spring fertilizer such as Elements or Plant-Tone.

— While Hosta are relatively pest resistance, deer can be problem. The damage is often done over night. If deer are a concern, planting deer resistance plants around them such as daffodils can help deter them. Consistent use of tried and true deer repellents can be effective. Many gardeners also use motion detection sprinklers to deter animals. Physically keeping deer away using deer fencing/netting is an option as well.

— Slugs can eat holes in the foliage. They are worse during rainy stretches during the growing season. You can dust the ground around the Hosta with some sand, crushed eggshells or a slug killer.

— Hostas make terrific space fillers. As hostas mature, they can be divided and multiplied to create more plants. This will limit how large the plant gets. Some choose to let them grow big and enjoy the look of a mature hosta. Ideally hostas are divided early in the spring or late summer/early fall, but in reality you can do it anytime. Hostas are extremely tough and resilient. Be sure to water them frequently if divided in summer.

—If it’s especially dry out, you can add mulch around the plant to prevent them from drying out. Be careful not to put mulch by the stems, a sneaky hiding place for slugs.

—While Hosta is known for its foliage, most plants will also produce flowers. Remove the flower stalks after they bloom to encourage new growth.

—Lastly, don’t be afraid to snip some Hosta foliage and bring it inside to enjoy as part of a flower arrangement. Hosta will do well in a jar or vase with water.

We mentioned deer above. For some gardeners, the deer are too prevalent to plant hostas reliably. If so consider using Pulmonaria, also known as Lungwort. Terrible name, but they can be very pretty plants that also have a variety of two tone green and white foliage colors that deer stay away from completely. They also flower, white, pink, purple, and blue. Astilbe, Forest Grass, Hellebore, Ferns, Bleeding Heart, Empimediums are others that are deer resistant.