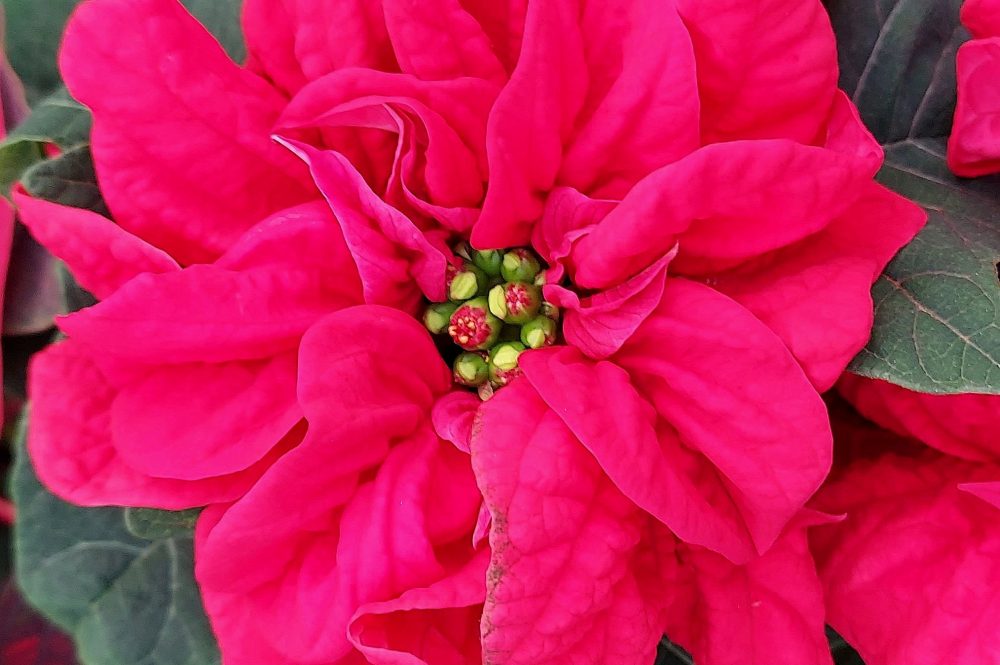 You probably know them as a traditional sign of the holidays. But Poinsettias have an interesting past, including playing a central role in a Christmas Legend that originated in Central America, where Poinsettias are a native plant.

The story began with a young girl named Pepita, who was sad she didn’t have a gift to leave for baby Jesus at Christmas Eve services. Her cousin comforted her with the idea that even the most humble of gifts, given in love, are valuable in His eyes. With no money to her name, Pepita made the most of what she had, picking a bouquet of weeds on the way to church. She left them at the foot of the nativity scene, where the weeds transformed into beautiful red flowers. From that day forward, those beautiful red flowers became known as ‘Flores de Noche Buena’ or Flowers of the Holy Night.

Today, we use them to add a pop of color and spirit to our homes, holiday displays and churches, and we often gift Poinsettias of every size and color.

But you might be interested to know a few slightly more obscure facts about these lovely holiday harbingers:

2.   Their main attraction is actually their leaves. The flowers of the Poinsettia are actually the yellow clustered buds in the center (‘cyathia’). It’s the leaves, or bracts, that turn color in response to the plant forming flowers. When buying yours, look for the clustered buds as a sign of a healthy plant.

3.   They get their name from the man who introduced them to the United States. It was the U.S. Ambassador to Mexico, Dr. Joel Roberts Poinsett, an amateur botanist, who introduced this relatively obscure plant to a Pennsylvania nurseryman, Robert Buist, who began cultivating them. The two men are credited with turning the Poinsettia (‘Euphorbia Pulcherrima’), whose leaves turn red in mid-winter, into a Christmas symbol.

4.   The first family to develop Poinsettias that could be potted and grown indoors is the same family who grows and distributes them today. It’s definitely a legacy with the Ecke family, descendants of Paul Ecke Sr., who turned them into a viable indoor plant in the early 1900s. Mr. Ecke Sr. was the one who figured out a method to make the plants branch. Prior to that, the stems grew so tall, they had to be bent back into a loop or ‘tromboned.’

5.   The Paul Ecke Ranch is behind the annual Poinsettia Bowl in San Diego. Now you know.

6.   Red is the most popular color. No surprise there, right? Red accounts for roughly ¾ of all sales nationwide, followed by white and pink. Today, they come in a wide range of colors, from red, salmon, apricot, yellow, cream and white. There are also designer speckled and marbled varieties, and new varieties are introduced each year.

8.   Poinsettias grow like a weed in the wild. In the wild, in Tropical climates, Poinsettias can reach heights of up to 12 feet with leaves measuring six to eight inches across? It’s actually a small Tropical tree.

9.   The flower had many uses throughout history. In the 14th-16th centuries, the Mayans and Aztecs used Poinsettia leaves to dye fabric for clothing and the sap, known as latex, for medicinal purposes, including to help control fevers. They also considered the red color a symbol of purity.

10.   The Poinsettia prefers things a lot like we do. Avoid hot or cold drafts, place in a room with lots of natural light and temperatures of about 60-70 degree Fahrenheit, and give yours water when it gets dry. Don’t wait until your plant tells you it’s thirsty by looking wilted, because then it’s too late.

P.S. Poinsettias are not poisonous. But that doesn’t mean they are edible, do keep them away from small children and pets who may choke on the buds or bracts.

Most of all, enjoy your Poinsettias and your holidays! And please let us know if you have any questions on how to help yours thrive.

Source: The University of Vermont